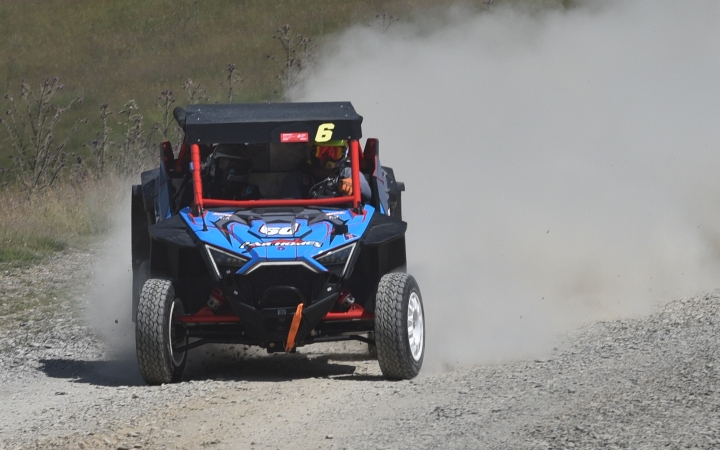 After a break of several weeks the Britpart British Cross Country Championship resumes next weekend with the penultimate round in Kielder forest in Northumberland, a legendary venue from the old RAC Rally days.

Taking into account dropped scores the championship is jointly led by Adrian Marfell and Richard Kershaw on 86 points, Marfell having won last time out at Sweet Lamb and Kershaw taking the win at the opening round at Parkwood.

Five points behind the leaders is Paul Rowlands in his Polaris (pictured). Rowlands has entered two cars this season and he is also in seventh place in his Lofthouse Freelander.

Reigning champion Justin Birchall is fourth after two punctures cost him hopes of victory at Sweet Lamb. In fifth is Andy Degiulio but he’ll be missing Kielder after putting a rod through the block of his Milner R5’s engine. A new engine has just been fitted but workload has left Degiulio short of time so he is focused on returning at the final round.

Hoping for a better weekend is Team OFG’s Phill Bayliss whose event ended with a fire at Sweet Lamb.

“It’s been a disappointing year up to now, especially Sweet Lamb where both cars we were running suffered damage,” said Bayliss. “For Kielder we’re going back to our trusty beam-axle car called Blaze as Chase is still a bit singed after the last round. My dad has spent the time since Sweet Lamb trying to get Blaze up and running but it’s not been easy due to gearbox troubles. However, a good old Ebay special seems to be working ok. We did a Staffs and Shrops event to give it a shakedown. I’m hoping it all goes well so we can have a trouble-free run. If it wasn’t for my dad we wouldn’t be racing so I can’t thank him enough.”

George and Jacqueline Bryson have spent the break between BXCC rounds preparing and competing in their immaculate Mk 1 Escort but they’ll be back in the Warrior Audoo Quattro for Kielder.

“Since Sweet Lamb we’ve rebuilt the gearbox and now have a clutch that works properly which should transform the car,” said George. “It’s been a busy time with doing the Galloway Hills rally as well but I’m really looking forward to Kielder.”

As well as the championship crews the event has attracted several weekender entries, once of whom is Toby Jefferson.

“I’m very happy to get an entry for Kielder,” commented Jefferson. “I’ve got Phil Ibbotson in the hot seat again. The car is hopefully all ready and is even on four new MRF tyres. I’ve got no knowledge of the venue at all so a good recce will be needed on my bike!”

The organisers have planned a course almost 10 miles in length with 12 runs scheduled over the two days of competition. Unfortunately, due to Covid restrictions, spectators are not permitted.