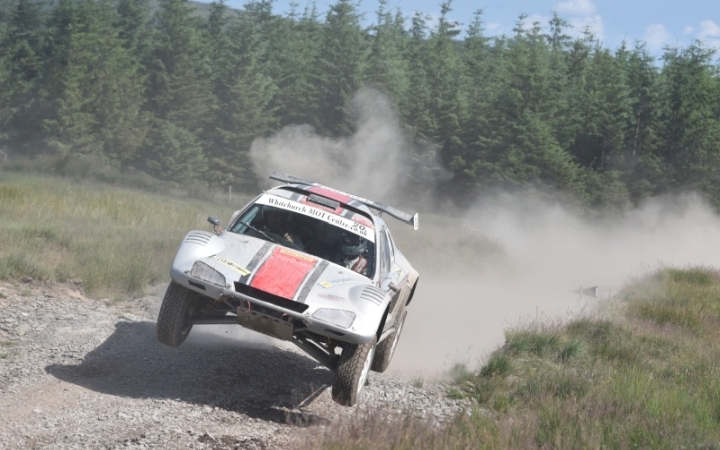 Adrian Marfell and Paul Bartleman battled back from the disappointment of losing a win at the opening Britpart BXCC round with victory at an extremely hot and dusty Sweet Lamb.

Justin Birchall was fastest on the opening run, beating Marfell by 7 seconds. Birchall and navigator Andy Powell continued to lead throughout the first day, ending up 36 seconds ahead of Marfell. Richard and Mason Kershaw were in third despite a fire on their Lofthouse Evo.

The lead changed on the opening run of the second day, a combination of Marfell being on the attack and Birchall having a puncture seeing the Whitchurch driver leading by four seconds. Marfell continued his relentless pace to win by 31 seconds.

“I’m chuffed to have got the win,” said Marfell. “We made a set up change late on Saturday night and pushed hard on Sunday. It was a great fight at the front. We had a couple of issues with a faulty kill switch and broken wipers on one run but other than that we had a good event. It makes up for the driveshaft failure at Parkwood when we were leading.”

A further puncture for Birchall saw him and Kershaw separated by just one second going into the final run. Kershaw set the fastest time of the final run to claim second place with Birchall having to settle for third.

“I’m more than happy with the result considering the issues we had,” said Kershaw. “The fire did a fair bit of damage and the service crew did an amazing job to get the car fixed for the Sunday runs. We also had problems with the brakes and the boost pipe. The result means we’re leading the championship at the halfway point.”

Birchall commented: “We were still in the running for the win after the first puncture even though Adrian was pushing hard. The second one lost us all chance of victory though and with Richard getting over his gremlins we had to settle for third.”

“Day one went well, other than being stupidly hot! Our only issue was a snapped braided brake hose. We picked up three punctures on the second day and the course got rough in places. We couldn’t keep up with the pace of the indy cars, they were gaining time especially on the new section of course with the washboards. I’m happy with 7th and winning the beam-axle class.”

Harry Nicoll and Emily Sibley had a successful event, finishing 20th from 50 starters in their Bowler Tomcat.

“We didn’t have any issues on day one but our 3.9 Rover V8 on carbs was lacking power and struggling on the hills,” said Nicoll. “On the second day we lost time on a few laps with the power steering pump failing which meant we had to do half a lap each time without power steering. On the final run we damaged a brake line and did over half a lap with very little brakes so I had a bit of luck on my side to get to the finish! I am very happy with 20th in an entry of such quality.”

George and Jacqueline Bryson’s event got off to a bad start before they had even arrived, a blow-out on the M6 meaning the journey to Sweet Lamb from Scotland took ten hours. They battled through a series of problems to get another good finish.

“We had problems on the early runs with catching the car in front and getting stuck in their dust,” said Bryson. “It got so bad that we had to stop a few times to let the dust clear. We also came across a Polaris off the road on our final run of day one, we stopped as the crew were getting out of the car but the marshal gave us the ok to carry on. I was put off my stride a bit though and made a total mess of a subsequent corner and had to reverse to get back onto the right track. The car and crew were suffering from the heat, we fitted a new air filter and modified the window washer to assist with cooling the radiator. This helped keep the engine cooler – but not the crew! We had some good runs on Sunday, we were enjoying it and weren’t taking any risks. Expensive-sounding noises started coming from the tunnel and we had to avoid using the clutch as much but we battled on and got to the finish.”

Tom and Alice Jones had a great weekend in their Can-Am Maverick, winning the Trophy class as well as being 12th overall.

“What a weekend! We started out on Saturday going pretty fast on the first run but we suffered with a rear puncture and also pinched a front brake line on the suspension arm. We aimed to be smooth and consistent and then push harder on the less damaging sections. We were absolutely cooked at the end of the first day but we were delighted to be winning the class. The first runs on Sunday went well, our times for the first seven runs of the event were all within 10 seconds of each other! We picked up a puncture later on Sunday after catching another car and going off line a little but we fixed the car up and had a safe final run to take the Trophy win. Time to give the car some TLC and get rid of some of that dust!”

Mike Wilson and Ian Letman made it to the finish but their weekend was not without problems.

“We started off with bags of confidence,” said Wilson. “We had a solid first run but then on the second we were catching the dust of our minute man and cooked the belt approaching Wilson’s hairpin. On the final run of the day we fell over on Ian’s side. With the help of a marshal we were soon on our way though. Day two was spent managing the temperature of the clutch belt in the heat and dust, we made it to the finish and got a class win.”

In Wilson’s old Freelander were Reece and Sean Mathieson who had a very successful first day but a problem-plagued second day.

“We were going well but on the third run we sheared the left-hand side engine mount bolts,” said Reece. “This caused real issues in controlling the power and the car itself. The engine movement then caused the driveshaft to come out, smashing into the gearbox and putting a hole through it! We struggled round the course as best we could but we lost second gear and then first meaning that we could go no further. As we’d done over 75% of the mileage we were classified as a finisher which massively cheered us up. We’ll need a new gearbox and mounts but we’ll get it sorted and be back out at Walters.”

Mike Faulkner and Peter Foy continued with their move from rallying to cross country, setting some quick times in their Warrior.

Foy commented: “It was a new event for us, we had a few tech issues with dust blocking the air filter which choked the 6 litre Chevy engine. Some local improvisation helped but the issue persisted. We were pleased to set two top 12 times on day one which shows promise for the future. It’s all part of a learning year and we’re really enjoying the challenge.”

It was an event to forget for Team OFG after appearing at Goodwood Festival of Speed the weekend before. Both Phill Bayliss and dad Chris were forced out of the running. Chris and navigator James Harding rolled their Land Rover 90 on the first day while Phil and his navigator Lance Murfin had several problems cumulating in a fire caused by the oil pipe coming off and spraying oil over the engine. Fortunately the fire was extinguished quickly but they could not continue so an emotional team left the venue with two broken cars.

The previous owner of the car Rob Bool, who also had a fire at Sweet Lamb, didn’t have a good event either in his Lofthouse M3.

“We had a great start and I was pleased with the times but then on the start line, with no warning at all, the clutch broke. We didn’t have a spare and so unfortunately we had to retire.”

Jasmine Philpott and Peter Widdop got their Warrior to the finish despite a steering failure on the penultimate run.

“We had a very stressful Friday getting the car back together, it ended up arriving late in the evening,” said Philpott. “Like everyone else we found the event super hot and the car seemed to pull dust into the cab, there were times I couldn’t see anything and I looked like I was wearing Halloween makeup after each lap. I was pushing as hard as I could but just couldn’t get below a 9 minute lap. The steering failure dropped us down the leaderboard but I’m very glad I survived the event, it was probably the scariest course I have ever driven!”

Colin Gould and Simon Kerfoot were in fourth place overnight in their Lofthouse Evo but a slipping clutch and an as yet undiagnosed transmission problem resulted in taking course maximums for the final runs which ended their hopes of a good result.

“We had a very good time, Saturday was great with no problems and we were in 10th place overall. I was a bit off the pace on Sunday as the course got rougher and we had a phantom puncture followed by a real one. We pulled off the course to avoid damaging the car or creating a dust problem for following competitors. Thanks to all involved in the event.”

In addition to the competitor prizegiving the organisers decided to give the “Spirit of the Event” award to Paul Chambers and Fiona Urwin who spent two days in the timing van where the temperature didn’t dip below 33 degrees and reached a peak of 44!