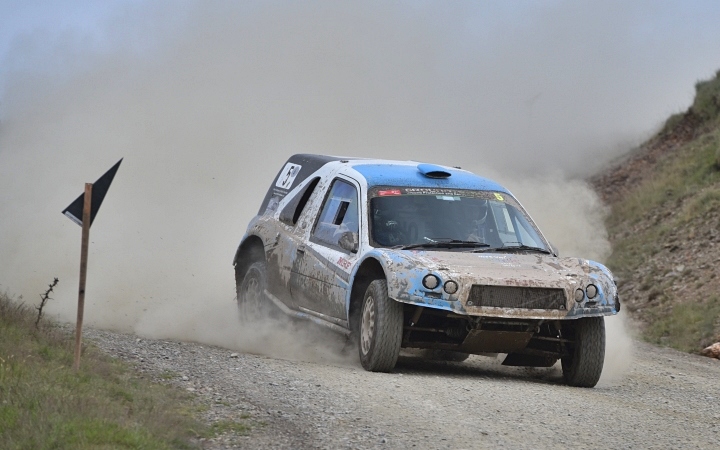 Britpart British Cross Country Championship (BXCC) crews will head to Bovington in Dorset next weekend for round four of the 2019 title battle.

A dramatic round three at Sweet Lamb saw Mark Jacques take a maximum score in his Lofthouse LS3 to lead the championship on 167 points, just one ahead of Justin Birchall whose recent run of good results ended after a crash.

Phill Bayliss is in third place with 157 points in his beam-axled Land Rover Special after finishing third overall at round two and second of the BXCC crews, and third overall, at round three.

“I’m very exciting coming in to round four in the top three,” said Bayliss. “We’re going to be pushing very hard at Bovington to try and better our two third overall positions. Go hard or go home!”.

Chloe Jones is in ninth place overall in her QT 88. Jones had another successful event at Sweet Lamb despite suffering from severe pain which ended up with her in hospital.

“I’m slowly on the mend after five days in hospital,” commented Jones. “I should be ready to race at Bovington. We’ve got some work to do on the racer too as we broke a rear prop at the last run of Sweet Lamb. Tom Gray will be navigating for me again and we’re hoping for another good event and some more points to keep us challenging on the leaderboard.”

One driver who won’t have his car at Bovington is Rob Bool who suffered a fire on his AT 4×4 Challenger at Sweet Lamb: “Unfortunately the car got quite badly damaged and there hasn’t been enough time to repair it. It’s very disappointing as Bovington is my nearest event to home. Hopefully we’ll be sorted in time for round five.”

Andy Degiulio’s Milner R5 crashed out of round three and he faces a race against time to be ready for Bovington.

“I’m busy burning the midnight oil trying to repair the car,” said Degiulio. “Mechanically it’s fine but there was extensive bodywork damage. I’m having a bad season and realistically I cannot now win the championship but I still want to prove I can be competitive and I genuinely enjoy being at the events socialising with other crews, they are a great bunch of people. I’m down but I’m not out!”

Production-class leader Michael Wilson will not be competing at Bovington as both his car and his navigator Ian Letman are injured. Wilson raced his Freelander at an event in Cumbria the week after Sweet Lamb and bent the suspension and flattened the radiator.

The action will start at 10am on Saturday with a full day of competition with the event expected to finish around 3pm on Sunday. As the venue is Ministry of Defence land no spectators are allowed on site. An image gallery from the event will be online on www.facebook.com/songasportoffroad on Sunday evening. For more information on the BXCC please visit www.crosscountryuk.org.