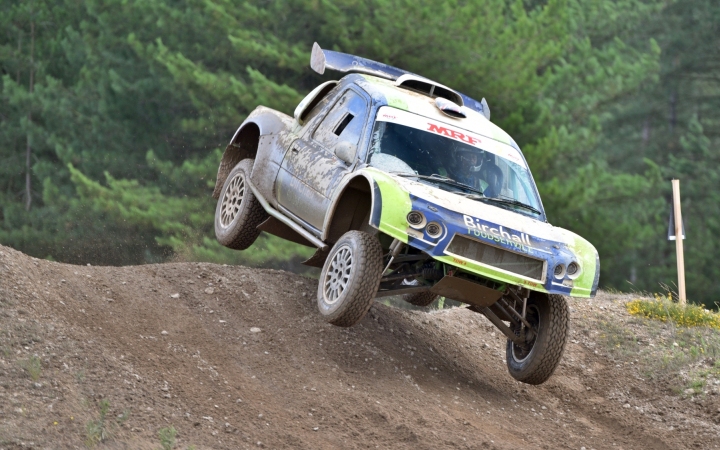 Justin Birchall and Jonny Koonja got their Britpart BXCC championship season back on track with a win at round four which was held at Bovington in Dorset, a venue which lived up to its reputation for causing drama.

Jason Rowlands set the pace on day one in his Can-Am X3 with fastest times on six of the seven runs of the course. His father Paul Rowlands was fastest on one run and was in second place up until run five when the drive belt broke, costing him around five minutes.

Birchall was in third place early on but moved up to second at the end of day one. Ryan Cooke had a good day one to finish in third position overnight.

The opening day didn’t go so well for some crews. Mark Jacques, who was leading the championship going into round four, had a locked transmission on his Lofthouse LS3, Richard Green’s Bowler stopped with a broken fanbelt, Chris Speakman had broken suspension on his Yamaha and Andy Degiulio’s bad luck continued with a snapped shaft on the transmission of his Milner R5.

Jason Rowlands continued to head the pack on the first run of day two, setting the fastest time of the event to extend his lead. It all went wrong on the second run though, a ball joint breaking as he approached the finish line causing the car to hit a bank before stopping in the course. Despite his father completing his runs and trying to use parts from his own car to effect a repair Rowlands was unable to continue and had to take maximums for the rest of the runs, dropping him to 12th place.

Birchall was now in the lead and he survived the rest of the day to win by almost three minutes.

“The crash at Sweet Lamb put me under pressure to get a good result at Bovington,” said Birchall. “I had a good lead there and then put the car on its roof when backing off on day two. I had to get my head into gear for Bovington, especially with the venue changing to the southern site a few days before. We did a few suspension tweaks on day one to try and improve performance over the bumpy terrain. The course dried out for day two which was in our favour and with the Rowlands’ cars having problems we managed to get the win.”

Paul Rowlands was left regretting the broken belt on day one as he finished in second place, despite being fastest on three of the five runs on day two.

“We’d been in second place behind Jason but then we had to stop to replace the drive belt. It took around five minutes to change it which dropped us to fourth overnight and, with Jason’s ball joint problem, possibly cost us the chance of a win.”

Ryan Cooke’s event ended in disappointment with his Milner LRM-1’s engine dumping its oil shortly before the finish of the final run. The resulting maximum dropped him to fourth place overall which meant that Phil Bayliss was promoted to third, his third consecutive third place.

“I’m happy to get third although not in these circumstances,” said Bayliss. “I was happy to be in the fifth place I was in at the end of day one, especially with Bovington being a very tough venue on the cars, so to end up with third is great. We had an alternator belt break on day one but luckily we had a spare with us so could do a repair on the course. On our final run I decided to push to try and beat our fastest time but around a third of the way in I drifted wide over a banking and into a drain hole. The radius arm bent and cut through the brake pipe which caused a loss of brakes but we managed to get round.”

Mark Jacques recovered from his day one issues to finish fifth. In sixth, and first BXC Trophy driver, was Oisin Riley in his Polaris.

“I’m pleased with the result,” said Riley. “It was a good course which suited our type of car, I enjoyed the experience.”

After missing the previous round Steve Smith returned in his JRG Clio V8 to take seventh. Harry Nicoll and Emily Sibley were eighth and first in class in their Tomcat on what was Sibley’s first time navigating.

Although they are more used to competing in endurance events Spanish crew Jesus Navarro and Raquel Dorado finished ninth and first in class in their McRae Enduro, the first time this make of car has raced in the British Championship. Another car making its first British Championship appearance was the Dacia Duster of Future Terrain team George Frost, Hannah Collins and Sean Whatley.

Rounding off the top ten was a Bowler Bulldog with driving duties shared by Richard Hayward and Greg Macleod, a result achieved despite suffering broken steering on day one.

With Rob Bool’s car not fixed after a fire at Sweet Lamb his usual navigator Victoria Vaughan raced her own car and finished 11th overall.

Richard Green and Richard Griffiths were 13th and first in class after overcoming their fan belt problem on day one. Chloe Jones and Chris Alridge took their QT 88 to 14th, Jones now recovered after ending the previous round in hospital in severe pain.

The final finishers were Richard Lane and John Tomley in a Land Rover Defender. Lane is a road tester for Autocar magazine so it will be interesting to read how his Bovington experience compares to testing supercars in exotic locations!

The championship will resume in September at a new site in Whaddon. For more information please visit crosscountryuk.org. For pictures from the event please visit www.facebook.com/songasportoffroad. Video coverage from the event will be available on www.youtube.com/specialstage.