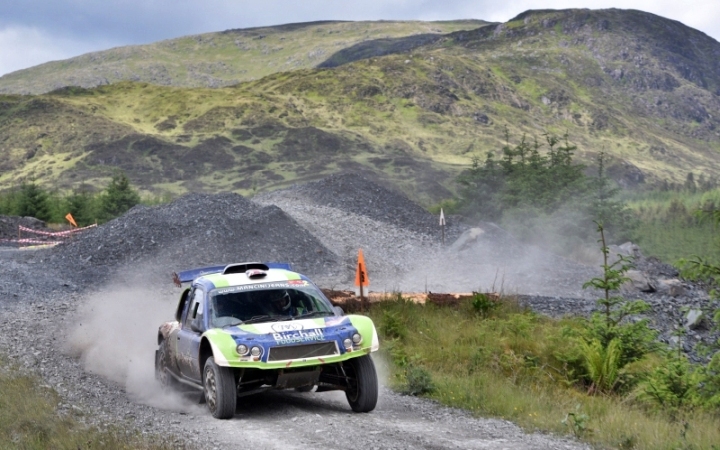 Justin Birchall and Jonathan Koonja battled through two tough days of competition to take victory at round two of the Britpart British Cross Country Championship. The event was part of the Scottish Grand Safari, held over two days and 127 miles at Forrest Estate in South West Scotland.

Birchall was fastest on the first two runs in his Lofthouse Freelander but after run three it was round one winners Adrian Marfell and Paul Bartleman who headed the leaderboard, just three seconds in front after 32 miles of competition.

Sadly the prospect of an event-long fight between Birchall and Marfell ended with Marfell’s Fouquet-Nissan going off the road on run four.

Birchall continued to set the pace, ending the seven runs of day one 2:15 ahead of Mark Jacques and Adam Nicholson with Phill Bayliss and Lance Murfin in third in their Land Rover Special.

The challenging 10.6 mile course was causing problems for some other crews with Jason Rowlands snapping a drivebelt on his Can-AmX3, Richard Wynne-William retiring with gearbox problems and Mike Moran also retiring with a cracked inlet manifold on his Lofthouse Evo.

A further five runs took place on day two and Birchall maintained his pace to take the win with Jacques in second.

“It’s been an extremely hard event, the quarry sections were particularly tough,” said Birchall. “The course was very challenging and it’s been harsh on both the car and crew. I’m very happy with the win, it’s all to play for in the championship now. Hopefully Adrian and Paul are ok after their off.”

For the second consecutive event Jacques achieved his best ever British championship result. He commented: “It’s been a great weekend, a tough course which was hard on the car and hard on the Lofthouse Motorsport team who had to work hard keeping us going. We didn’t really have any major issues though, the main problem was losing the fans but we managed to bypass those.”

It was a best-ever British result for Bayliss in third too, a position maintained despite breaking a propshaft, resulting in the last two runs having to be done with just rear wheel drive.

“We had a lot of niggles with the car but it was a case of just getting on with it,” said Bayliss. “I’m still learning how the new car handles, racing in the damp and slippery conditions here was very different to the dry tracks at Walters. It was a cracking weekend, the course was scary in some places!”

Rob Bool and Steve Llewellyn finished fourth in their AT 4×4 Indy Challenger ahead of Andy Degiulio and Paul Foley who, despite a few punctures, had a successful event in their Milner R5 which had been rebuilt after a high-speed crash at round one. Martin and Aston Cox were sixth in their GSR 206.

Phil Ibbotson and Karina James had a good run to seventh in their Metro 6R4 although Ibbotson needed a change of pants after fighting to avoid putting his car into a ditch after exiting one of the quarry sections, a moment that lasted around 100 metres going from lock to lock.

Chris and Oliver Speakman finished eighth and first of the UTV cars in their Yamaha YXZ. Oisin Riley and Philip Richards were ninth in their Polaris with the Insanity Racing team of Jon Damrel and Nic Blundell taking their Land Rover Tornado to tenth, a great result after the problems the car had at round one.

Steve Smith and John Griffiths finished just outside the top ten in their Clio V8. Chloe Jones and Rebecca Clarkson were 12th overall and first in class on their first event together.

Michael Wilson and Ian Letman had a crash part way through day one, their Freelander rolling twice down a bank, colliding with a tree stump on the way. The car was recovered though and they got their final day one run in with seconds to spare. A less dramatic day two ended with them 13th overall and winning the production class.

The championship will resume in July at Sweet Lamb in Wales. For more information please visit crosscountryuk.org. For pictures from the event please visit www.facebook.com/songasportoffroad. Video coverage from the event will be available on www.youtube.com/specialstage.