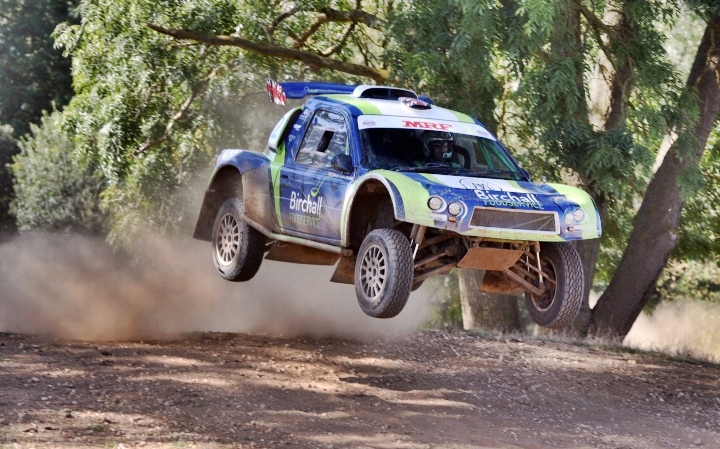 The final round of the Britpart British Cross Country Championship takes place next weekend at the Walters venue near Glynneath in South Wales and the title is up for grabs with several crews in with a chance of taking the win.

After five rounds Justin Birchall heads the championship leaderboard on 328 points, just five ahead of Mark Jacques. Phill Bayliss is in third place with 300 points but he could be hampered at Walters by a wrist injury sustained at the previous round which necessitated a trip to hospital after the event.

Paul Rowlands is in fourth place with 273 points and Martin & Aston Cox are in fifth on 266. Aston commented: “The car has been re-bushed after the last round at Whaddon and we’ve fixed the steering that failed on us. Simon Kerfoot will be navigating for us, we’re going to have a huge push at Walters to see if we can climb the championship table and put pressure on Justin and Mark. We’re hoping it won’t be too wet!”

Round 5 winner Andy Degiulio is looking to end his season in style in his Milner R5: “Hopefully the weather will be kind and we’ll have a successful finish to the championship. I’ve rebuilt the rear diff after breaking it at Whaddon and I’ve taken out my spare diff and refitting it ready for the last round.”

After missing two rounds after a fire at Sweet Lamb Rob Bool is hoping to return to the championship for the last event. “It’s been a bit of a nightmare trying to get the car sorted,” said Bool. “I’m desperately trying to get everything ready to race at Walters.”

With Jon Damrel forced to miss the previous round Oisin Riley has already wrapped up the BXC Trophy championship with 344 points. Damrel is in second with Tom Harris third.

In addition to the championship crews there’ll be a few non-championship entrants at Walters including Martin James in his Lofthouse Freelander. He commented: “The engine has been rebuilt and we’ve done some running in and tweaking on the rolling road as well as getting the flat shift to work as it hadn’t done previously. I’ve not raced since March so I can’t wait to get out there.”

Joining James will be two former British championship drivers, Neil Davey in his Yamaha and Andi Skelley in his Milner R5.