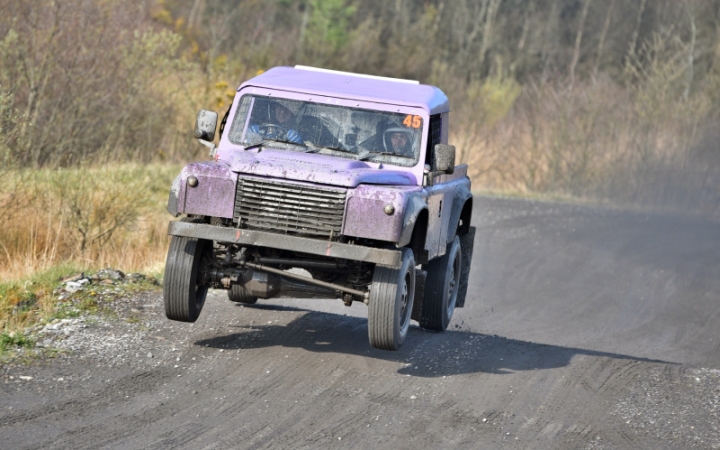 The Britpart British Cross Country Championship (BXCC) will resume next weekend when the crews head to the idyllic surroundings of Forrest Estate in South West Scotland for round two.

Adrian Marfell leads the title battle after his win at round one and he went well in his Fouquet-Nissan last time the British championship visited the venue, finishing second overall.

Justin Birchall is in second place in his Lofthouse Freelander. In between BXCC rounds Birchall contested the Welsh Hill Rally where he took a convincing win, he also raced in France.

Another Lofthouse driver is in third, Mark Jacques in his LS3-engined example. Jacques was another driver who did the Welsh Hill Rally, sadly retiring on the final day whilst third overall.

Michael Wilson and Ian Letman will bring their production-spec Freelander to the event after a problematic round one which saw assorted parts of the car needing replaced. “The car is back together after Walters,” said Wilson. “We’ve got a new gearbox, stronger driveshafts and new shocks. We have the famous Andy Price on the spanners for the event, he knows his way round a Hippo!”

Chloe Jones won her class at round one and she’ll be looking for a repeat performance in Scotland. Jones has a new navigator for the event with Rebecca Clarkson joining her in the QT 88. Clarkson is driving in the NORC championship this year, finishing third last time out and she also navigated for Aston Cox in the Welsh Hill Rally. Clarkson commented “It’s my first time navigating for Chloe, I’m really looking forward to it and it’s great to have an all-female crew in the National A championship for the first time in many years.”

After using his Land Rover 90 TD5 at the opening round Phill Bayliss and Lance Murfin will be using their new car at Forrest Estate following a successful Welsh Hill Rally last month. “We had a great result at the Welsh Hill Rally, winning our class and finishing 12th overall,” said Bayliss. “I’m excited to be racing the new machine in Scotland, it looks like it’ll be a good long course for us to get our teeth into.”

Insanity Racing’s Jon Damrel is hoping for better luck at Forrest Estate following a troublesome weekend at round one. Electrical gremlins and fuelling issues on day one were followed by event-ending mechanical problems on day two. “It was going really well,” said Damrel. “We were increasing speed and confidence and then the centre bearing on the front prop tore out of its mountings, bending the driver’s floor alarmingly and putting a significant hole in the bell housing. That was our event done. Hopefully Scotland will be kinder.”

Andy Degiulio crashed out of round one but his Milner R5 has been fixed and he’s looking forward to racing in Scotland. He commented: “After my big accident at Walters I’ve finished all the repair work on my car and will be at round two. I’ve never been to the venue before so I don’t expect to set the world alight. I just want to get my confidence back, get some mileage on the car and get some points in the bag. After a disastrous first round my championship effectively starts next weekend.”

The action starts at 10am on Saturday with a full day of competition. The event is expected to finish around 3pm on Sunday.

For more information on the BXCC please visit crosscountryuk.org. Pictures from the event will be available to view on facebook.com/songasportoffroad and video coverage will be provided by Special Stage.